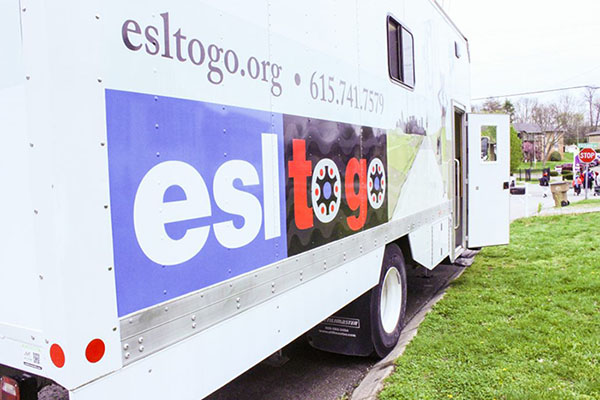 ESL to Go, a grant-funded program that is part of the Tennessee Language Center (TLC), has been able to provide free English classes to over 1,700 students in the Nashville area with the help of generous funders including the Dollar General Literacy Foundation. ESL to Go was recently awarded another year of funding from Dollar General.

The Dollar General Literacy Foundation was established in honor of Dollar General’s co-founder, J.L. Turner, who was functionally illiterate with only a third-grade education. Since the foundation’s inception in 1993, they have awarded more than $182 million in grants to literacy programs including ESL to Go. TLC is thankful that ESL to Go’s refugee students are among the 11 million students who have been impacted by the Dollar General Literacy Foundation’s generosity!

ESL to Go was founded in hopes of helping refugees overcome barriers to attending classes, with transportation being at the top of the list.

ESL to Go uses a “classroom on wheels” in the form of a Ford F-650 truck equipped to be a fully functioning classroom to take English classes to the areas where refugees live. ESL to Go also works closely with local refugee resettlement agencies, community organizations, apartment complexes, and churches who allow ESL to Go to use free classroom space, so TLC-trained teachers are able to meet with refugee students close to their homes.

TLC’s Teaching English as a Second Language program has trained 57 cohorts of teachers who have gone on to teach English students both locally and internationally, including for ESL to Go.  Recently, ESL to Go has expanded class offerings to include virtual classes in order to continue helping students access classes during the time of social distancing.