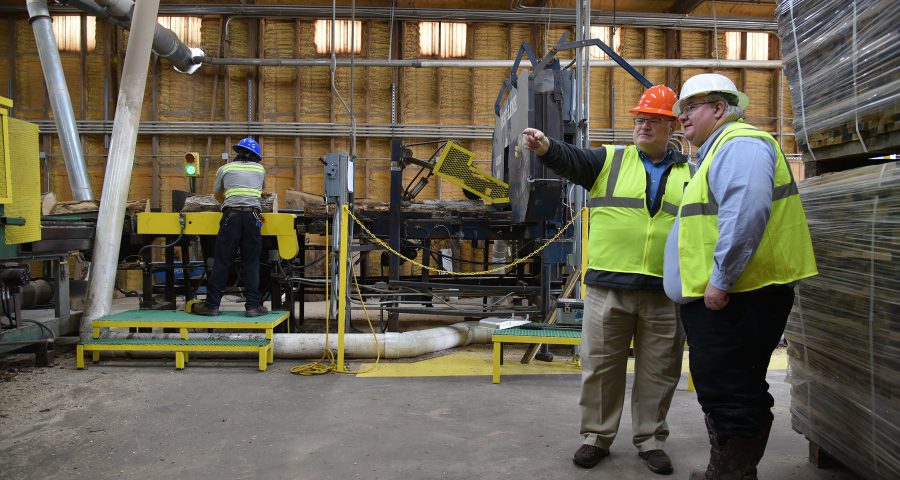 Waymon Scroggs looks at his job as “more of a craft, than it is a vocation.”

Scroggs is plant manager of White Oak Stave, LLC., a sawmill business in Medon, Tenn. that has operated since 1962. In 2004, it was bought by Robinson Stave Company of Kentucky.

“We take the logs in here, we cut them up, we air dry them, kiln-dry, then ship them to Kentucky where they make the whiskey barrels. It’s a very unique kind of business. It’s more of a craft than it is a vocation,” Scroggs said. Scroggs has been working in the lumber and logging industry for over 26 years and became the Stave plant manager in 2018. “As of two years ago we had 42 employees. Now we’re close to 80 employees and still hiring, so we’re still expanding to keep up with our new cooperage that Robinson Stave Company just built in Kentucky. Our production has expanded massively in the past year to year and a half.”

The whiskey industry has seen an increase in demand in recent years, and White Oak Stave is expanding its business to meet that demand. With a high demand for its product and an expanding workforce, White Oak Stave and its parent company, Robinson Stave, began researching resources and training opportunities to help them improve their businesses. They asked themselves ‘How can we get a better-quality stave into a barrel, do it faster and more efficient and how can we cut down on waste’? That’s when Scroggs discovered UT Center for Industrial Services (UT CIS) and the Tennessee Manufacturing Extension Partnership. UT CIS is an agency of the UT Institute for Public Service.

“My general manager sent me a link to [UT CIS]. He said they have a Toyota Kata class, and I said ‘well, I’ve never heard of that before’, and he knew I was very much into lean manufacturing. I have a book here about lean manufacturing that I’ve been studying, so he said ‘well, you should go take this class’”.

Scroggs and his assistant manager enrolled in a UT CIS Toyota Kata class with the help of UT CIS Solutions Consultant Keith Groves. With the Kata training still fresh in their minds, the team leaders quickly began integrating what they had learned when they returned to White Oak Stave. Scroggs and his team realized that they weren’t fully utilizing all of the processes and materials already available to them at their facility. They were able to incorporate the Kata principles and maximize the use of their kilns.

“We were able to save the company four million dollars a year because of that project,” Scroggs said.

Groves is one of nine solutions consultants in Tennessee who provide technical assistance to small and mid-sized manufacturers and businesses across the state. He serves Haywood, Madison, Henderson, Decatur, Chester, McNairy, Hardin and Hardeman counties. After Scroggs and his team began implementing the Toyota Kata principles they learned in training, Groves spent some time onsite to work with the company on its value stream mapping.

Not only did the company save money by improving its processes, UT CIS OSHA safety consultant Bryan Lane helped the West Tennessee business identify safety and health hazards at the facility, as well as training and program needs. Scroggs said he found this assistance to be “very beneficial.”

“We did another project that helped us to streamline blocks getting in our mill and how to speed up production while making the wood flow through the mill better,” he said. “It’s already making a huge impact; thousands or millions of dollars. It’s well paid for itself.”