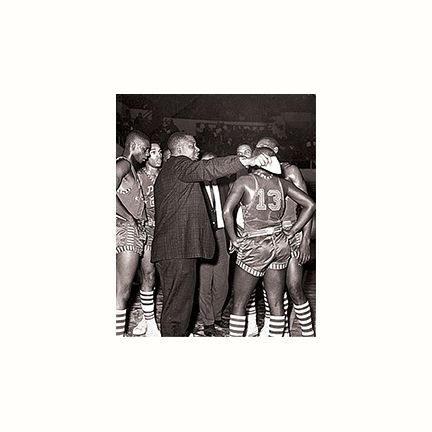 As we close Black History Month, we remember the stories of national notables like Martin Luther King, Jr. However, there are other individuals who do not have national notoriety but worked with others in their local communities in extraordinary and meaningful ways. These individuals are fathers, community leaders, teachers, neighborhood basketball coaches, and sometimes, all four. We close out the month with a focus on Cornelius Ridley or “Coach Ridley” as he is fondly called. If the last name sounds familiar, it is because Cornelius Ridley is the father of CIS’ very own, Keith Ridley.

Coach Ridley attended Nashville’s Pearl High School, now the site of Martin Luther King Magnet School. He grew up an avid football player and fan. His passion for football led him to Lane College to play football on an athletic scholarship. His interest in basketball was developed here  (https://tshf.net/halloffame/ridley-cornelius/) and eventually led him back to Pearl High School as a coach.

Prior to 1965 and early in his tenure as a basketball coach, John Wooden, famed UCLA basketball coach, sought out Ridley and another local coach when visiting the Nashville area. Nashville was the host city for national high school championships for black schools before integration.

“Wooden was instrumental in helping my father develop as a coach,” Keith Ridley said. “Wooden introduced my father to the importance of taping games and studying the game and opponents”. (http://tssaasports.com/halloffame/inductee.cfm?id=156 ).

In 1965, Monsignor James Hitchcock (teacher and principal at Father Ryan High School), Mayor Beverly Briley (the first Metro-Nashville Mayor), and Coach Ridley decided it would be good for the city and ease integration challenges by hosting a basketball game between Father Ryan (a predominately white high school) and Pearl High School (a predominately black high school). Both schools were considered to be the city’s two best teams. Mayor Briley offered the Municipal Auditorium as the venue.

Perry Wallace, who was on the team and later became the first African-American to play basketball in the SEC at Vanderbilt remarked, “He was a master. Not only was he a great coach, he was a great strategist in every way, not only about basketball. He grasped so fully the significance of the game and helped to guide us through it successfully. That’s just the way he was.” (https://dioceseofnashville.com/news/ryan-pearl-communities-celebrate-historic-game).

Pearl lost the game on a last second shot to Father Ryan, but Ridley believed the game achieved a larger goal of using sports to help bring people from different races together. He considered the game a major personal achievement. The crowd of 8,500 was the largest to attend a high school basketball game in Tennessee. The next year, 1966, Pearl went on to win the first integrated state basketball tournament (http://tssaasports.com/halloffame/inductee.cfm?id=156 ).

In addition to the 1966 State Championship, Coach Ridley’s teams won: