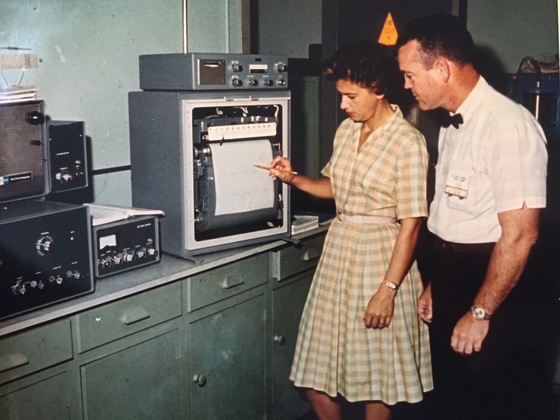 Raising two children on her own after my father died, going about her work every day, my mother was both an enigma and a hero to me. She did the things that other mothers did–cooking, cleaning, helping with homework, going to my soccer games, taking my brother and me on camping trips, and more. But then something would break down at our house, and my mother would be in the garage, at the work bench, finding a solution. I did not see my friend’s mothers doing small engine repairs!

My family had a catfish farm outside of my hometown of Jacksonville, Fla. Yes, a catfish farm. Because we only went to the farm on weekends, we needed a way to feed the fish on a daily basis. What to do? Well, you build something of course! My mother built a large contraption that fed the fish while we were away. I was always amazed by her ability to face a complex problem, not let it put her off, and just solve it with her hands and smarts.

Sarah Frances Hart O’Brien graduated from Duke University in 1954 with a bachelor’s degree in chemistry (she flew through it in three years, of course). She started out in pre-med but fell in love with chemistry as she would explain when asked “why chemistry”? After graduation, she worked in a medical research lab at Duke, but decided to move back home to Florida where she worked in an industrial lab until 1959. She left this lab for the bigger challenge of working at the Naval Air Station where she began what was to be a 30-year career.

When she was hired at NAS at the age of 26, she was the only woman chemist in the lab. She received accolades from her male co-workers as was noted in several newspaper articles written about the “woman chemist.” One co-worker said, “In fact, when I have a piece of work handed to me that is going to take a lot of figuring, I hand it right over to Sarah. It’s the quickest way to get it done.”

My mother would eventually be promoted to manager of the lab and would consult at bases across the country. She had the chance to pioneer such projects as a plane engine exhaust “scrubber” designed to remove particulate matter from the engine exhaust. She led this effort to bring Navy planes into compliance with regulations from the newly formed Environmental Protection Agency.

As well as being a scientist, my mother had some interesting hobbies for a young woman in the late 1950’s. For instance, the local newspaper made much of the “woman chemist” who also owned and showed championship cocker spaniels in an article headline that read, “Keen Kemist Keeps Kool Kocker Kanines.” In the early 1960’s, she was working on a pilot’s license while owning and living on a plot of sandy Florida property. I have seen pictures of myself as a baby on the old tractor that she on hand for chores. She drove a convertible Porsche and wore a Rolex. Class and brains! She had it all.

As a college student with a feminist fire in my belly, I asked my mother what it was like to work in a male-dominated field and on a military base in the early days. Typical of her understated approach to life, she said, “I didn’t really think about it, I just worked hard and did my job.” That’s not what I wanted to hear—I wanted to hear that she challenged “the man” and raised a ruckus. Of course that was not her way. Hard work, smarts, and ingenuity were her trademarks.

The last few Catchup articles have looked at truly amazing people that worked to make a difference in their worlds and, in some cases, the nation. Sarah Frances Hart O’Brien was a ground-breaker in her own profession, a tinker, a gardener, a lover of animals, and more. My mother was an extraordinary woman who did ordinary things her way. But most importantly to me, she was my mother, my biggest cheerleader, and my hero.